Ace (formerly Jughead) is a playable mascot in Crossy Road, it was added as a secret mascot in the Micro Update.

As of the Halloween Update, Ace is a boy with black hair, a green shirt, and a red cap. However, he maintains the same body build as the former Jughead.

Prior to being changed to Ace, Jughead was a humanoid in a yellow shirt with a white letter S printed on the front of it. He also wore a gray crown with a white line and red dot on it, orange shoes, blue jeans, and he always kept his hands in his pocket, just like the real Jughead from Archie comics.

Ace is a secret mascot, consequently, the player cannot obtain him by normal means. (i.e. unlocking him from the Prize Machine) The player must play as Rocky and collect a total of 50 burgers. These burgers scatter the screen, sort of like how the flowers scatter during the gameplay with Forget-Me-Not. A player can collect the burgers in multiple runs to accumulate them. The player shouldn't worry if they see cheese in one burger and none in the other, because either way, they are both acceptable.

Ace has similar characteristics to all of the humanoid mascots. The terrain the player plays in is the grassland. The only thing that makes him special is because at the moment of his death, he blows up to twice his size, then he explodes. However, this was actually a glitch and was patched as of the Korean Update. Now when the player dies, his red cap falls off and you will hear a ringing noise. If he happens to die in the water, his cap will levitate over the spot.

Jughead was added to Crossy Road

Jughead was renamed into "Ace," and he is given a new appearance

The new look and alias of Jughead

Ace on the run

Add a photo to this gallery 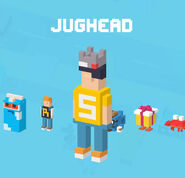 Jughead in the mascot select screen

Retrieved from "https://crossyroad.fandom.com/wiki/Ace?oldid=37589"
Community content is available under CC-BY-SA unless otherwise noted.