The Baller is a playable mascot in Crossy Road.

The Baller appears to be an African American basketball player with dark brown hair, a yellow Tank top blue shorts, and white shoes. He is always dribbling an orange basket ball as he walks.

Similar to most of the standard mascots, the setting the Baller traverses in is the grasslands, with trees and rocks as obstacles. The only enemy being the Eagle, who will pick the player up if they idle for too long resulting in a game over. When playing as the Baller, there will be a basketball. He will dribble the basketball all the time, and when he dies, he will drop the basketball and it will bounce away from him.

How to Unlock Edit 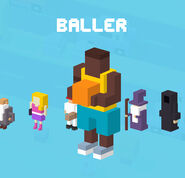 The Baller in the selection menu.
Add a photo to this gallery

Retrieved from "https://crossyroad.fandom.com/wiki/Baller?oldid=35724"
Community content is available under CC-BY-SA unless otherwise noted.