Not to be confused with Ben Weatherall (Mascot).

Ben Weatherall, also known by his Twitter name as SunraHeadgear, is one of the artists of Crossy Road.

Ben Weatherall is an Australian freelance artist. He mainly works on iOS and Indie games. Before going freelance, he worked for almost 5 years at Firemint, later known as EA Firemonkeys Studios. There he worked on titles including Flight Control, SPY Mouse and Real Racing. 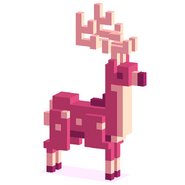 Ben Weatherall's avatar used on his social media accounts
Add a photo to this gallery
Retrieved from "https://crossyroad.fandom.com/wiki/Ben_Weatherall?oldid=36553"
Community content is available under CC-BY-SA unless otherwise noted.