The Blue Truck is a common vehicle appearing in Crossy Road. They only occur on roads.

Blue trucks can only occur on roads, these are extremely common lanes that are usually everywhere. Blue trucks appear in their own lane.

Blue trucks are very common in Crossy Road. They only appear on roads. Like any other car, if the player makes contact with it in anyway, the player will die, resulting in a game over.

Blue trucks, like many other vehicles can be easily avoided if the player follows this common strategy.

1) Wait until the roads are empty or near empty

No strategy is without its flaws. If the player waits too long, they will be killed by the eagle. If the player over-taps, they can pass the grasslands that sometimes divides other lanes and go straight into the middle of a river, railway, or another road.

Blue trucks look similar to the trucks in real life. They have a white storage with a blue cabin. They are similar in size to the red trucks and have six wheels. Sometimes, an orange, light red, or gray Mickey Mouse head may be spotted near the end of the truck, on the white section. This is used to acknowledge Disney Crossy Road. 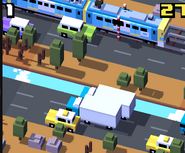 Two blue trucks
Add a photo to this gallery
Retrieved from "https://crossyroad.fandom.com/wiki/Blue_Truck?oldid=36089"
Community content is available under CC-BY-SA unless otherwise noted.