Start a Wiki
The Chicken is the primary mascot and a playable character in Crossy Road.It is the default character in-built in the game that the player will receive upon opening the app for the first time. It is currently not available from the Prize Machine.

The Chicken has a basic structure similar to Baby Duck. He has white and red feathers on the top of his head and below his beak, and orange feet and an orange beak.

Upon game play, the terrain will be the normal grasslands. The only enemy being the Eagle, who will pick up the player if they idle for too long. When hit by a car or a train, feathers will fly into the air from the Chicken. It will also occasionally cluck when walking, and when dying (eg. When it hits a car.).

There are currently 13 variations of the Chicken, as of the most recent update.

The Chicken is the first mascot the player will get, as it is available when the app is downloaded. It is not possible to purchase or unlock it from the Prize Machine. 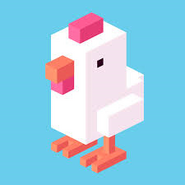 The Chicken mascot, as protrayed on the default icon of Crossy Road. 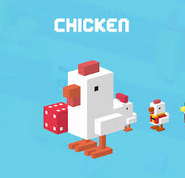 The Chicken in the mascot selection screen.

A game-generated image of a Chicken riding the Hipster Whale off of the map, consequently resulting in its death.
Add a photo to this gallery

Retrieved from "https://crossyroad.fandom.com/wiki/Chicken?oldid=37875"
Community content is available under CC-BY-SA unless otherwise noted.