This is a list of all the decorations and obstacles that were added in the Chinese New Year Update.

These appear as red envelopes with a "¥" symbol on it. In Chinese tradition, these red envelopes are given to relatives for good luck. In Crossy Road, 20-23 of these are needed to unlock Cai Shen.

The player may occasionally encounter these small fireworks. When the player goes near them, they explode in the air and create colorful particles. In Chinese tradition, these fireworks were originally used to scare of "Nian", a monster to lived under the sea or in mountains.

These temples appear around the snow landscape. They come off as different colors. There are yellow ones, and red ones. The yellow ones have a brown roof, whereas the red ones have a black roof. In Chinese tradition, people go to these temples to pray to a God called "菩萨".

Occasionally, there will be red lanterns flying in the air. Lanterns are a common decoration used during the Chinese New Year holiday. Upon gameplay, they cannot be interacted with in anyway.

An example of Chinese Fireworks.

A pair of red and black temples.

Six yellow temples next to each other.

A couple of Chinese Anvelopes. 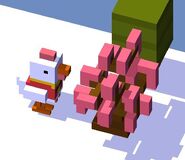 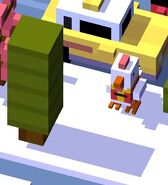 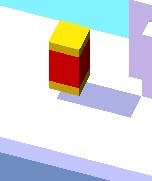 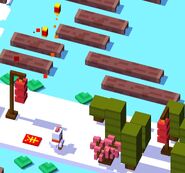 A couple of Chinese decorations
Add a photo to this gallery
Retrieved from "https://crossyroad.fandom.com/wiki/Chinese_New_Year_Decorations?oldid=36203"
Community content is available under CC-BY-SA unless otherwise noted.