Start a Wiki
Coins are one of two currencies in Crossy Road.

Coins can be obtained by:

Often throughout a run, the player will come across coins. They can be found almost anywhere, from roads, railroads, grasslands, and even in rivers (on logs and lily pads, or even the Hipster Whale!). When the player passes over a coin, the coin will be collected and increase the players amount of coins by one hundred if it was a yellow coin and by five hundred if it is a red coin.

A coin on the Hipster Whale

A red coin on the road 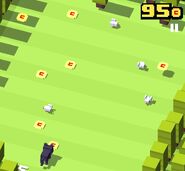 There are two types of coins: a yellow coin and a red coin.

Red coins are special, in the sense that they are only available through in-app-purchases. If the player purchases the Piggy Bank for $3.99, they will also have unlocked red coins. As an added bonus, the player will also receive 1000 coins. Red coins are then found like yellow coins; by doing runs.

Coins have the same basic shape as a real life coin. They are around the size of the player, depending on which mascot you are playing as. The yellow coins are yellow with a red C and the red coins are red with a yellow C. Coins are flat.

Coins only have one use: obtaining mascots. If the player saves up at least 100 coins, after death they will be given an option to cash in 100 coins for a chance at winning a new mascot in the Prize Machine. If you have gotten all the mascots and you have 100 coins or more it won't give you the option. Also, for 10,000 coins you can buy the slippy penguin.

Retrieved from "https://crossyroad.fandom.com/wiki/Coins?oldid=38709"
Community content is available under CC-BY-SA unless otherwise noted.