Crocodiles are a type of aquatic obstacle in Crossy Road. They only appear when playing as an Australian, Prehistoric, or African mascot. (There is also an actual mascot named Crocodile .)

Crocodiles look similar to real crocodiles. Their whole body is green and they have 2 visible teeth. The crocodiles have six spikes on their backs.

They appear in the Prehistoric terrain too, a little bit more brownish.

Crocodiles consist of three parts; the tail, the body, and the head. Crocodiles can be used as logs, by jumping on the back or the tail but if the player jumps onto the head of the crocodile, it will eat them, ending the run.

Crocodiles can also move at different speeds, determined by the speed that a specific river section flows at. This can be either beneficial or act as a drawback for the player.

Crocodiles can easily be avoided, the player can simply wait for them to pass, by jumping on their bodies/tails, and/or jumping on logs instead. 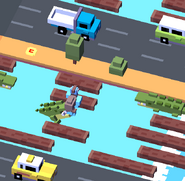 A crocodile eating an Emu

The rare glitch of the sideways crocodile

A croc eating a koala

The croc with the old texture

A crocodile eating Parasaurolophus.
Add a photo to this gallery

Retrieved from "https://crossyroad.fandom.com/wiki/Crocodile?oldid=37719"
Community content is available under CC-BY-SA unless otherwise noted.