Crossy Road is a mobile game released on November 20, 2014. It was developed and published on iOS by the indie company Hipster Whale, consisting of Andy Sum, Matt Hall, and Ben Weatherall, and published on Android by Yodo1 Games. According to Hipster Whale, it has over 150 million downloads.[1] Crossy Road presently is downloadable on a PC via Windows store, and is available for Apple TV as well.[2]

The essential idea of the game is to get as far as possible across the roads, rivers, grass and train tracks without losing. The player plays as a mascot and must swipe the screen in the corresponding direction to move the mascot or tap to go forward. (On a PC version the player uses arrow keys/the mouse to go forwards) Along the way there will be many obstacles, such as rivers, trees, boulders, cars, and trains. To get past these obstacles the player must go past them at the appropriate moment and path to ensure survival or to use other objects to get across rivers such as logs and lily pads. The Eagle will come fly up and snatch the mascot provided they stay in the same place too long or move too far back, resulting in a game over.

Every square unit moved forward will earn a point. The more units that are moved, the more points that will be received. Note that the player cannot earn points by moving backwards, sideways or moving backwards then repeating the process of moving forwards again. Every 50 points is signified by a clicking sound. This clicking sound gets more and more high pitched as it progresses.

Along the way there will be yellow coins with red "C's" engraved on the covers representing coins. To obtain these coins the player must simply move the mascot to the coin's location.

While playing the game, the player will have to choose a mascot. The default mascot is a chicken, which is obtained at the start of the game and the other mascots can be obtained via the lottery machine, purchasing them for $0.99, doing certain quests or in some cases cross-buying another game from the App Store.

Mascots can vary from many different species such as animals and humanoids. Various mascots also have the ability to change the time and theme and have other unique aesthetic abilities. Some mascots are also reference to well known internet icons such as the Doge and #TheDress mascots referencing to the memes and the Pew Die Pug referencing to Felix Kjellberg's (better known as PewDiePie) dog. Some mascots also reference other games like the Disco Zoo, Epoch, Forget-Me-Not, referring to the game.

Some mascots are hidden, like Cai Shen. They can be obtained by doing a certain quest (collecting, etc.).

The Prize Machine can be used with 100 in-game coins and will relinquish a random mascot, though it may give a mascot which has already been received.

Coins are an in-game currency with the sole use of buying random mascots with the Prize Machine. Coins can be obtained in-game via landing on them, watching videos, collecting the free prize and using real money to buy them in various amounts. Coins show up in the top right corner as yellow circles engraved with red "C's". Every 100 coins can be used at the slot machine.

For concepts and concept art in Crossy Road, see here.

For Glitches and Oversights in Crossy Road, see here.

For the list of techniques in Crossy Road, see here. 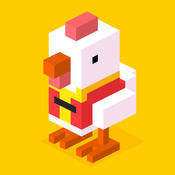 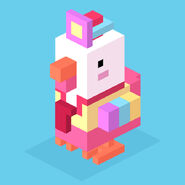 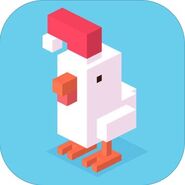 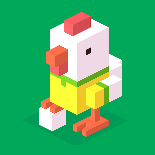 Icon for the Brazil Update 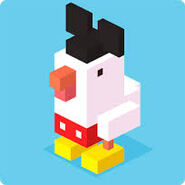 Icon as of the Disney Update

Icon as of the Arctic Update

Icon of the At Home update