The Dingo is a playable mascot in Crossy Road that was added in the Australian Update.

This mascot resembles a dingo in real life, which is an Australian wild or half-domesticated dog with a sandy colored coat. It has an orange pelt, a pale sandy-yellow underbelly, and a short tail. It has a brown nose and dark brown ears.

When playing as the Dingo, the Grasslands are replaced by the Desert. Also, as the Dingo is part of the Australian update, the Drop Bear appears as an enemy and so does the Crocodile. The Dingo gives off a short gruff bark. 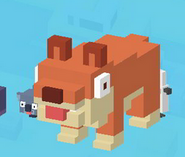 The Dingo in the selection menu.

The Dingo still locked.
Add a photo to this gallery

Retrieved from "https://crossyroad.fandom.com/wiki/Dingo?oldid=35388"
Community content is available under CC-BY-SA unless otherwise noted.