The Diver is a playable mascot in Crossy Road.

The Diver has a humanoid appearance, resembling a scuba diver with snorkel, air tank, flippers, and wetsuit. The Diver’s hair is big, maybe representing the floating hair of a real diver under the water.

The Diver has brown hair, a black & orange snorkel, yellow mask, yellow air tank, green wetsuit top, green flippers, blue wetsuit pants, and a black belt. The Diver hops, rather than swims, through the Ocean terrain, and leaves a fleeting trail of bubbles behind it. When the Diver moves, its hops make a sound and there are also different breathing sounds. When the Diver dies, it makes a short cry of pain and releases a spray of bubbles. A large whale swallows the Diver if it delays too long or retreats too far. The Whale makes a realistic whale-song noise as it swallows the Diver.

Diver can be unlocked from the Prize Machine for 100 Coins, or you can purchase it for $0.99. 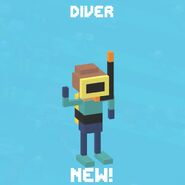 Side view of the Diver in the Ocean terrain.

The Diver is flattened by a fish, releasing a spray of bubbles.

The Diver is snatched by the Whale for delaying or retreating.
Add a photo to this gallery

Retrieved from "https://crossyroad.fandom.com/wiki/Diver?oldid=37696"
Community content is available under CC-BY-SA unless otherwise noted.