The Emu is a playable mascot in Crossy Road that was added in the Australian Update.

The Emu is based on the real life animal, called a emu, which is an Australian flightless bird that resembles an ostrich. It has shaggy brown-gray plumage, a long neck, blue bare skin on the head and neck. It has brown feathers on its head. Its feet and beak are brown in color, with the color of its beak being darker than its feet.

When playing as the Emu, the Grasslands are replaced by the Desert. The Drop Bear also appears as an enemy. Simultaneously, the rivers contain crocodiles that will only kill the player if they step on their heads. Notably, the Emu, along with all the Australian animals, can be used to unlock the Drop Bear. While moving along you can hear hopping noises.

You can unlock the Emu with the Prize Machine for 100 Coins, or you can purchase it for $0.99. 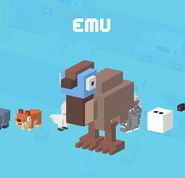 Emu in the selection menu
Add a photo to this gallery
Retrieved from "https://crossyroad.fandom.com/wiki/Emu?oldid=35889"
Community content is available under CC-BY-SA unless otherwise noted.