Epoch is a playable mascot in Crossy Road. It is based on the main character from the game Epoch.

Epoch is modelled off the main character from the game Epoch. It is a blue, greyish robot with a black hand gun and yellow highlights.

Similar to most of the standard mascots, the grasslands serve as the terrain for Epoch. Trees and boulders appear as obstacles and the only enemy being the Eagle, who will pick the player up if they idle for too long. Epoch will occasionally shoot straight ahead of it, which burns trees and blackens cars and trucks. The sound of gunfire accompanies the firing of Epoch’s gun. It will not do this until the run starts, and will play a reloading sound before quickly shooting again. Even though it shoots trees and obstacles, they are still an obstacle and can not be walked through. Epoch cannot incinerate rocks or trains. 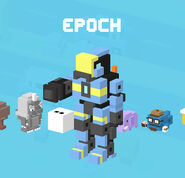 Epoch torching a tree.
Add a photo to this gallery

Retrieved from "https://crossyroad.fandom.com/wiki/Epoch?oldid=36895"
Community content is available under CC-BY-SA unless otherwise noted.