Forget-Me-Not is a playable mascot in Crossy Road. He can be found in the prize machine or can be bought for 0.99

Forget-Me-Not is based on an indie game that designer Matt Hall played, called Forget-Me-Not. It is a white cube with two black eyes on the top of its body.

When playing as Forget-Me-Not, pink flowers (which are fairly rare, though not as rare as coins), like those in the original Forget-Me-Not game, can be found on the map. Collecting more than ten of the flowers will cause the screen to flash a different colour after picking each one up and will cause a strange noise. After picking up 20, a ghost will appear on the screen and will stay there until the player gets killed. While it is on the screen, it begins floating without direction around the screen and producing swirly sounds, as if to distract the player or obscure the mascot. Once 30 are picked up, a bright yellow flash will appear, accompanied by a strange sound (much like what happens when 10 pieces are picked up).

This video shows some of the characteristics of Forget-Me-Not:

Forget-Me-Not can be unlocked with the Prize Machine for 100 Coins, or purchased for $0.99 (or the equivalent currency).

"Forget-Me-Not was a game that I really loved by a Melbourne designer called Brandon Williamson. It's one of my favorite iOS games, and it sort of went into obscurity. But I really loved the character, and I wanted to help him out, so I petitioned him to let us put the character in the game. The little pink things are from his game. The more you collect, the more it changes the game."
―Matt Hall

The advertisement for the app. 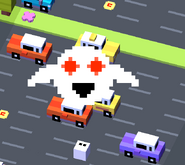 The Ghost that appears when collecting enough pink flowers.

Forget-Me-Not and his ghost. 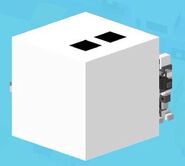 Forget-Me-Not on the mascot selection screen

Being snatched by the Eagle
Add a photo to this gallery

Retrieved from "https://crossyroad.fandom.com/wiki/Forget-Me-Not?oldid=40850"
Community content is available under CC-BY-SA unless otherwise noted.