Frankenstein is a playable character in Crossy Road. He is based off Frankenstein's Monster.

He appears to be a monster with green skin and brown hair, who is wearing grey clothes and has darker ears. In game, however he becomes black and white instead of showing up in his natural color, to resemble an old film.

Frankenstein can be purchased for $0.99 or can be unlocked through the Prize Machine for 100 Coins.

Similar to most of the standard mascots, the grasslands serve as the terrain for Frankenstein. Trees and boulders appear as obstacles and the only enemy being the Eagle, who will pick the player up if they idle for too long.

He is extraordinary because the screen turns black and white when playing as him, as if it was a movie in the 1800s, which will make it hard to see when trains or the lights of a Police Car are coming. Occasionally, lightning will flash in the screen and thunder will boom in the background. He growls randomly and makes random noises.

As of Version 1.2.6, the background is now an ordinary color, with the thunder and rain still going on in the background. However, this was reverted in the Disney Crossy Road Update 2016. 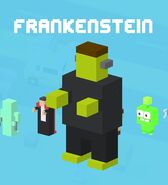 Add a photo to this gallery
Retrieved from "https://crossyroad.fandom.com/wiki/Frankenstein?oldid=34761"
Community content is available under CC-BY-SA unless otherwise noted.