Gifty is a playable mascot in Crossy Road that was added in the Christmas Update (2014). Gifty is currently grouped with the Festive mascots. Unlike most of the other mascots, it cannot be unlocked with the Prize Machine because it is a secret mascot.

Gifty is a yellow present with a white lid and a magenta bow. It also seems to have a Chicken inside, as it shares the same feet and would explain some of the characteristics.

Upon gameplay, the landscape will be the standard grasslands. Trees and boulders appear as obstacles and the eagle appears as an enemy. When Gifty walks, its feet are animate and they move, giving the illusion of running. His footsteps make a thumping sound. Upon death, Gifty lets out an explosion of coloured confetti.

This video shows how to unlock Gifty:

Gifty, as shown when locked 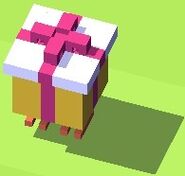 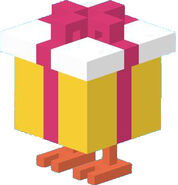 Add a photo to this gallery

Retrieved from "https://crossyroad.fandom.com/wiki/Gifty?oldid=36733"
Community content is available under CC-BY-SA unless otherwise noted.