K-Drama Actor is a playable mascot in Crossy Road, he was added in the Korean Update.

The K-Drama Actor (한류스타 in Korean) resembles a Korean Drama actor. He has dark brown hair and he wears black glasses, a grey suit with a grey under suit and a white collar with a blue tie. He also has gray pants and black shoes.

The player always starts off on a red carpet. During the run, there are unique obstacles. These obstacles consist of fans, the Paparazzi, and Skyscrapers. During the run, the mascot will wave its hands at his fans and the Paparazzi. Upon death, the paparazzi will continue to take photos, and the fans will continue to jump with excitement. Also, death will not hinder this mascot's waving movements.

There are different kinds of fans. For example, there is a fan who waves a "Hi" sign at the player. There are also fans who wave signs with a star on it. There are also fans that jump up and down with excitement. Most of the paparazzi look identical to each other - all of them wear red, and have black hair. Death will not stop their actions. 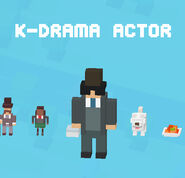 The glitch where the fan hovers above the air

The beginning of the run
Add a photo to this gallery

Retrieved from "https://crossyroad.fandom.com/wiki/K-Drama_Actor?oldid=34435"
Community content is available under CC-BY-SA unless otherwise noted.