Kimchi is a playable mascot in Crossy Road. It was added in the Korean update.

Kimchi (김치 in Korean) resembles the realistic Korean national dish, a dish consisting of spicy pickled cabbage. The in-game Kimchi has a white plate, and orange/red being the spicy sauce and green being the pickled cabbage content inside it.

When the player plays as Kimchi, Korean obstacles appear during gameplay. The Crossy Road logo translates into a Korean logo.

Like a lot of the other mascots, the Kimchi plays in the grasslands. Every time Kimchi hops, the food bounces, which drops food bits off of the plate. It is silent except for a soft jumping sound. When the KimchI gets hit, run over or fall in the river, bits of Kimchi gets splattered where the Kimchi got hit. 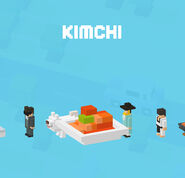 Kimchi in the mascot selection screen.

edited picture of the Kimchi
Add a photo to this gallery
Retrieved from "https://crossyroad.fandom.com/wiki/Kimchi?oldid=35993"
Community content is available under CC-BY-SA unless otherwise noted.