The Leprechaun is a playable mascot in Crossy Road that was added in the  UK & Ireland Update. It cannot be unlocked from the Prize Machine as it is a secret mascot.

The Leprechaun is based off the creature of Irish folklore with the same name. It is short with a green hat, green torso with a brown belt and golden belt buckle, green pants, brown shoes, an orange beard and orange hair.

Upon gameplay, the standard grasslands are replaced with the UK & Ireland Terrain. The Leprechaun will make incomprehensible sounds like "Babadabada" occasionally and when killed, he will yell as if in agony. He will also make Rainbows appear, littering the area as obstacles which he can jump through. When he picks up coins, which emit white particles, he will make triumph noises.

The Leprechuan in a run, notice Nessie in the river

The Leprechaun getting caught by the Eagle. 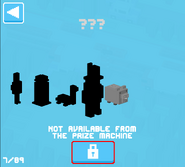 Leprechaun before being unlocked

The leprechaun in Crossy Road.
Add a photo to this gallery

Retrieved from "https://crossyroad.fandom.com/wiki/Leprechaun?oldid=35423"
Community content is available under CC-BY-SA unless otherwise noted.