The Nudibranch is a playable mascot in Crossy Road.

Nudibranch can be unlocked from the Prize Machine for 100 Coins, or you can purchase it for $0.99. 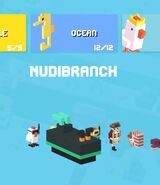 Nudibranch - front view showing the orange eyes and black rhinophores on its head. 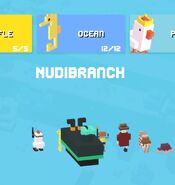 Nudibranch moving across the Ocean terrain leaving a trail of fleeting bubbles.

Nudibranch sprays bubbles as it is flattened by a hammerhead shark.

Nudibranch flattens itself as it moves towards the bottom of the screen, leaving a bubble trail.
Add a photo to this gallery

Retrieved from "https://crossyroad.fandom.com/wiki/Nudibranch?oldid=37695"
Community content is available under CC-BY-SA unless otherwise noted.