Pac-Man is a mascot that was released in the Pac-Man Update. It was confirmed on the Crossy Road Twitter and Facebook pages. Its inclusion can be linked to Hipster Whale's game Pac-Man 256.

Pac-Man resembles a 3D version of the famous arcade character. He is a flat bright yellow circle with a opening at one end to resemble a mouth.

Pac-Man is now for free as a in-app purchase to everyone. He now can be purchased for 0.00$

Pac-Man introduces an entirely new theme. Everything is black except for outlines that change color throughout the run. The game begins with the starting tune from Pac-Man. The game is not scored by how many steps forward you do, but by how many Pac-Dots you eat. The cars are replaced by ghosts. Eating a Power Pellet causes the ghosts to turn blue and can be eaten. The eagle is replaced by the glitch which creeps up from the bottom of the runway, the same way in Pac-Man 256. 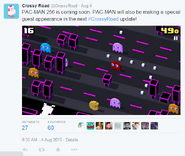 Pac-Man before being unlocked
Add a photo to this gallery

Retrieved from "https://crossyroad.fandom.com/wiki/Pac-Man?oldid=38367"
Community content is available under CC-BY-SA unless otherwise noted.