Start a Wiki
The Phone Box is a playable mascot in Crossy Road, it was added in the UK & Ireland Update. It cannot be unlocked from the Prize Machine as it is a secret mascot.

The Phone Box is based off of the traditional telephone boxes found in many parts of the UK used for calling by many people. They are tall, red phone booths with small window-like holes and it has a dark brown base. And they have a phone inside that can not be obtained or used by anyone. ANYONE!!!

When it moves, it makes a bashing sound right when it gets back on the ground after hopping. Also, a phone ringing from the inside of the Phone Box can occasionally be heard.

The Phone Box is a secret mascot and therefore cannot be unlocked by the Prize Machine, but by a special method. The player has to play with a UK or Ireland character until arriving at a large open Clearing. Then if the player hears a phone ringing, following it will lead the player to a red telephone booth making the sound. If the player gets close to the booth the phone will stop ringing and the player will receive the Phone Box after death. A video showing how to obtain the Phone Box is provided below:

The Phone Box in the mascot selection screen. 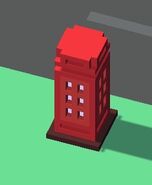 The player approaching the Phone Box.

The Phone Box as it appears when playing as the Fancy Lady.

The Phone Box in the rain.

Phone Box with the Phone box. 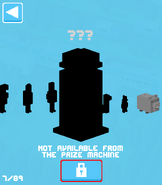 Phone box before being unlocked

Retrieved from "https://crossyroad.fandom.com/wiki/Phone_Box?oldid=37746"
Community content is available under CC-BY-SA unless otherwise noted.