The Pro Gamer is a playable mascot in Crossy Road who was added in the Korean Update.

The Pro Gamer (프로게이머 in Korean) is holding a small Game controller. He has black emo hair and he wears an orange, white, and blue jacket with orange and white sleeves with a grey beakfas on the back. He also wears white and blue pants along with grey shoes.

While playing as the Pro Gamer, you can hear a Korean commentator in-game. Occasionally, a swarm of pink creatures might pass randomly and quickly, killing the mascot if interfered with. Also, an actions per minute (APM) counter is shown underneath the score. You can also hear background noise of the audience cheering. When the player dies the commentator sometimes will shout "GG" (Good Game).

The creatures look like Zerglings, a basic attack unit of the race Zerg from the game Starcraft, considering Starcraft is a popular game in the country of Korea.

The Pro Gamer cannot be unlocked by using the Prize Machine, but can be obtained using a special method. Using any Korean character, the player must achieve a score of around 100 while maintaining an APM (actions per minute) score of around 150-200. While waiting to cross, tap left and right to keep moving, which will help keep your APM from dropping. 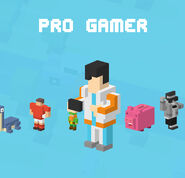 Pro Gamer in action.
Add a photo to this gallery
Retrieved from "https://crossyroad.fandom.com/wiki/Pro_Gamer?oldid=37319"
Community content is available under CC-BY-SA unless otherwise noted.