Scaredy Cat is a playable mascot in Crossy Road. It was added in the Halloween Update.

Playing as the Scaredy Cat changes the setting into a Halloween theme; this changes the grass into a dark orange color, all trees become bare and dead, and multiple Halloween obstacles are present during gameplay. Along with its usual hopping, it is occupied by hissing and screeching sounds.

Scaredy Cat can be unlocked from the Prize Machine for 100 Coins, or you can purchase it for $0.99. 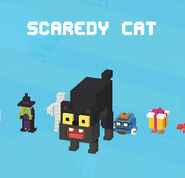 Scaredy Cat in selection screen
Add a photo to this gallery

Retrieved from "https://crossyroad.fandom.com/wiki/Scaredy_Cat?oldid=35346"
Community content is available under CC-BY-SA unless otherwise noted.