The Seahorse is a playable mascot that can be found in the ocean tab of in Crossy Road.

Seahorse is a simplified version of a real seahorse, with a horselike head, squarish body, and a curly tail. Seahorse has a brown eye, yellow head, body, and tail, with a darker yellow coronet and dorsal fin. Seahorse is very thin and flat when viewed from the front or back.

Like all Ocean mascots, Seahorse moves across the floor of the Ocean terrain leaving a fleeting trail of bubbles. Like its real counterpart, Seahorse floats and swims horizontally, while holding its body vertically upright. When Seahorse swims, its tail stretches back. A splashing sound is heard with each movement, as well as background sounds of bubbles and water typical of the Ocean terrain. When Seahorse remains on the spot, its body drifts slowly in all directions as though moved gently by the water. When Seahorse collides with another fish, a slamming sound is heard. When Seahorse dies, it releases a final spray of bubbles. If Seahorse remains still for too long or retreats too far, it is swallowed by a large whale.

Seahorse can be unlocked from the Prize Machine for 100 Coins, or you can purchase it for $0.99. 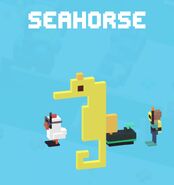 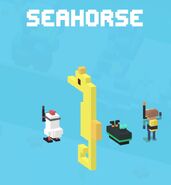 Seahorse in the Ocean terrain.

Seahorse - side view in Ocean terrain.

Seahorse is swallowed by the Whale for delaying too long.
Add a photo to this gallery

Retrieved from "https://crossyroad.fandom.com/wiki/Seahorse?oldid=37693"
Community content is available under CC-BY-SA unless otherwise noted.