The Seal is a playable mascot in Crossy Road. It was added to the Arctic Update and is located with the other Arctic mascots.

The Seal has bluish-grey skin. Its eyes are on the sides, a white stripe on its chest, a black nose, two buck teeth, fore flippers on the ground, and long hind flippers behind it. The Seal makes a few different realistic seal-sounds as it moves.

Like the other Arctic mascots and snow-themed mascots, the Seal plays in the snowy terrain. During gameplay, a red ball may appear. The player may choose to get it or not. If they choose to get it, the Seal will play with it by bouncing the ball on its nose. Either randomly or upon death, the ball will drop and bounce away.

The Seal is a secret mascot, which means it cannot be unlocked through the Prize Machine. To unlock the Seal, the player must play as the Polar Bear and complete all five missions to collect trash in the terrain. After finishing the 2000

mission, the Seal will be unlocked. 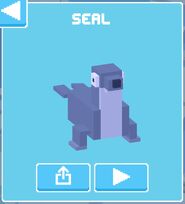 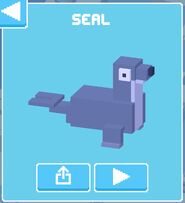 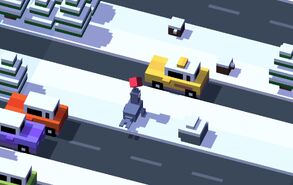 The Seal balancing the red ball while moving through the Arctic terrain.
Add a photo to this gallery

Retrieved from "https://crossyroad.fandom.com/wiki/Seal?oldid=37590"
Community content is available under CC-BY-SA unless otherwise noted.